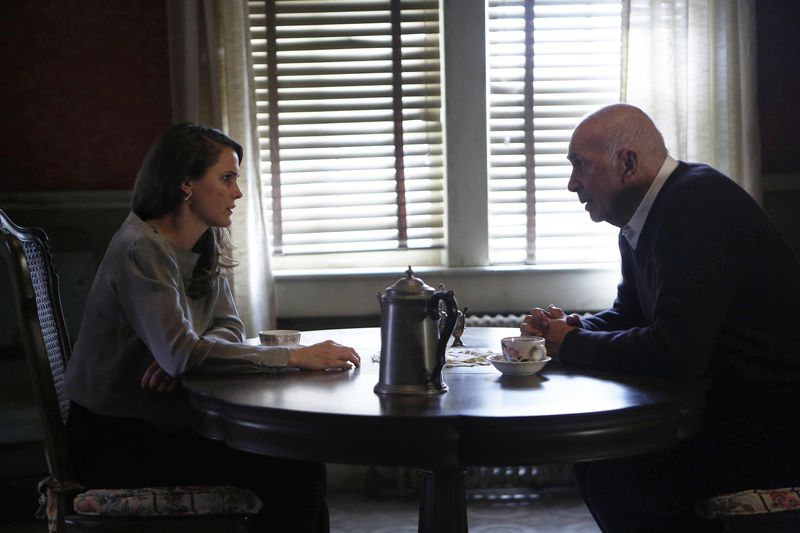 For the first time since she came to the U.S., Elizabeth Jennings, Soviet spy extraordinaire, has made a genuine female friend.

The fact that she’s under cover as Mary Kay seller Patty is a minor point, for Elizabeth (Keri Russell) feels such a connection to gregarious Young-Hee that the ultimate goal of using her husband, Don, has become a deadline Elizabeth can’t bear to meet.

This was an operation that perhaps should have been over a while ago, but given the seven-month vacation gap in the last episode, Elizabeth continued her sole mission of being a friend to Young-Hee far longer than expected.

Now that the operation is back up, Elizabeth has already drugged and (not really) had sex with Don, who is racked with guilt over his self-perceived adultery.

Don is a military researcher into the use of pathogens as bioweapons. In an earlier episode, Elizabeth and husband Philip (Matthew Rhys) already experienced an unhappy run-in with another pathogen sample they helped transport to their side of the Cold War.

So for Elizabeth to have to a. betray her friend and b. deal with yet another U.S.-made deadly weapon, is entirely too much.

But before we learn what she plans to do, “Munchkins” visits other ongoing plotlines.

There’s Pastor Tim’s heavily pregnant wife, Alice, who bursts into the Jennings home to accuse them of kidnapping her husband. Thankfully, Henry is upstairs in his room, away from the drama.

Pastor Tim and a fellow believer are in Ethiopia on a religious mission where they’ve gone missing. Alice points out that Ethiopia is a “client state of the Soviet Union”, which to her means he’s finally paying the price for Paige’s admission to him about her spy parents.

Philip and Elizabeth are authentically stunned by this allegation. After all, they’d considered then discarded the idea of killing the couple because they knew Paige would instantly suspect them of the deed.

Alice claims she has made a tape about them and given it to a lawyer to mail to the State Department in case she dies. She demands that they use their contacts to find and release her husband PDQ.

Paige (Holly Taylor), who has stood by throughout this exchange, has a somewhat cooler head than Alice but makes some of the same points. It’s plausible, after all.

After Paige heads to her room, Philip and Elizabeth wonder briefly whether their compatriots offed the minister but realize they wouldn’t have left Alice alive.

Once again, they’re buffeted by the impact of Paige’s initial mistake in confiding to her pastor, and by the fact that their effort to build a real family in the U.S. has created a daughter thoroughly spooked by the possibility they might ever have to flee to the Soviet Union.

Even so, Paige, who has been dutifully reporting to her parents all along about the pastoral couple, continues to show some spy potential.

When it turns out Pastor Tim had simply run out of gas in a remote area and is back in communication, Paige gauges that it’s too soon to ask Alice to give back the tape.

Matthew shares her father’s admission that his former boss’s secretary turned out to be a KGB spy. An unsettling thing to know for Paige, as it underscores that her parents aren’t the only ones playing roles.

She’s continuing to learn more about her parents’ authentic backgrounds, as seen when she and Philip are cooking dinner. She asks whether Philip’s mother was a good cook.

“She made a soup I liked,” he recalls. His father, who was a logger, died when Philip was six, so his mother had to be especially tough in raising the family.

As for Paige’s question about happiness, Philip sees that as an American kind of obsession. “We didn’t think that way. Life was about working hard and doing what you had to in order to protect your family. After the war, people didn’t have much.”

Young Philip aka Mischa worked after school in a rake-making cooperative. “The guy who ran the place got greedy and tried to pay only half of what he owed me. My mom went over there…and then he paid me all of it.”

Philip later pays a visit in his hippy role as James to his ongoing target, Kimmy, a teenager not unlike his daughter. He’s successfully avoided having sex with her, which is a level of ick he and the show have dodged, but since he planted a bug in her CIA father’s satchel, he must continue the contacts.

Philip aka James has the “best weed,” as a stoned Kimmy observes. She shares with him that her father works for the CIA, but Philip is more cautious than wowed.

“I don’t think you should’ve told me. It’s a secret. It could bring you and your dad together, but only if you keep it,” he says, knowing full well the complications that have arisen from his daughter’s admission to her pastor.

The truth is complicated and in the wrong circumstances it could kill.

Take former FBI departmental head Gaad, who is on vacation in Thailand with his wife. While she’s out shopping, he’s paid a visit by a trio of Soviet agents.

They’re wanting to talk with him, perhaps to try to suborn him into revealing secrets, but he makes an immediate break for it.

By instinct one of the agents tries to follow him but he’s unable to stop his stride in time to avoid crashing them both into a plate glass door.

Gaad by far suffers the worst injuries, dying in under a minute from a deeply imbedded shard of glass in his side. The lead agent is stunned, concerned, and yet unable to do more than say aloud that he’s sorry, something he repeats as the trio leaves.

Back at the Soviet embassy in Washington, D.C., spy chief Arkady opens a diplomatic pouch to learn about this botched mission.

Shaken, he tells his operatives Oleg and Tatiana, “An operation went bad. Maybe it should never have been planned in the first place.”

Back at the FBI office, Gaad’s replacement—who agents Stan and Dennis Aderholt derisively call a Munchkin—gives them the news, which raises Stan’s level of ambient anger to an even higher degree.

He has to do something with this rage, but what? This episode leaves the question hanging, and given its predilection for anxiety-laden plotlines, Stan may have to stew for a while longer.

Meanwhile, handler Gabriel and Philip play their usual game of Scrabble as the elder informs the younger about ongoing operational plans.

They have to obtain the security codes for the U.S. bioweapons floor. Since their KGB plant, William, doesn’t have access to that level, other means must be found.

Elizabeth had been tasked with coercing Young-Hee’s husband, Don, into providing the codes, but while that part of the operation is proceeding fitfully, Gabriel is putting together the rest of the team.

Turns out he’s recruited an American librarian who is in her mid-forties. The quiet, unassuming type. “You wouldn’t notice her if she was sitting on your lap,” he says.

Gabriel began the recruitment when he picked up on the fact she had a copy of a radical newspaper called “The Militant” hanging out of her purse.

A little online research reveals that this is a Trotskyite publication, which makes it somewhat unlikely that such a person would willingly work for the Soviet Union. This is, however, a TV show about 1980s Soviet spies in the U.S., so a certain suspension of disbelief comes in handy at times.

Gabriel (Frank Langella) shares that their KGB plant, William, “has been monitoring things at the lab.” Depending on certain factors, Gabriel’s team may have to swing into action in anywhere from a few days to a few weeks.

Philip is protective of his wife, a vital part of the plan, and as he points out, “Last time, we nearly started an epidemic.”

“How could I forget,” says Gabriel, who came close to dying when the stolen bioweapon sample leaked.

As for the current bioweapon target, “this is supposed to be 10 times worse,” Philip comments.

Gabriel counters that “the best deterrent is strength. Furthermore, even the President [Reagan] says that.”

At any rate, the radical librarian, South African student Hans—who we’ve met in earlier episodes—along with William and Philip are vital parts of the operation, which has yet to be laid out in much detail.

Laid out in detail elsewhere are Soviets Oleg and Tatiana who have taken an intensely physical liking to one another. During a break in their action, Oleg gently chides her about her having not yet tried Twinkies. He likes many material aspects of American life, and when he learns that Tatiana works for the mysterious Department 12, he naively protests the Americans don’t have a biochemical weapons program. Tatiana know that’s untrue. She asks him for a little help in obtaining a trained agent from back home. Someone who speaks perfect English and knows computers, a woman in her fifties or sixties.

This is a show suffused with many types of relationships, where none of them are easy, or easily definable.

For Elizabeth and Philip, the primary condition under which they operate is one it happens they can admit to their daughter.

Elizabeth says to her, “The hardest thing we do in our jobs is trust. We never know if the other people are telling us the truth. The one thing your dad and I have is, we tell each other the absolute truth.”

Philip adds, “And now that we’ve told you about us, you’re a part of that.”

Elizabeth continues. “We can’t tell you every detail about our jobs, but we will tell you what we can.”

Paige absorbs this then responds, “When are you going to tell Henry?”

“A lot of that depends on Henry,” Elizabeth says. Being that Paige’s rising suspicions played a role in her eventually learning the truth, she has to know that her brother, not so little anymore, is on the same journey she’s on, but a few steps behind.

The episode concludes with handler Gabriel’s visit with Elizabeth. Both he and Philip have questioned Elizabeth’s desire to continue with the manipulation of Young-Hee’s husband, Don.

Although she again denies any hesitation, Gabriel says, “It’s possible for people like us who give everything for our country and for the world to forget ourselves…It’s okay. You’ve already done the hard part.”

“No, the next part is the hard part. After that, they’ll never recover.”

“No, they don’t. They shouldn’t,” Elizabeth says with a well-splintered resolve.

Gabriel says gently, “Before we take the last step, we’ll ask the Centre if there’s another way in. We don’t know everything they know. Do you want me to ask?”

Elizabeth, the strong, Elizabeth the nigh well unbreakable—Elizabeth pauses and says yes.

She always had a heart, however well disguised she contrived to make it. In a season of strong cast performances, Keri Russell delivers a gem.

For more revelations, both acting and otherwise, tune in next week for another episode of The Americans.